Latest
Mock Draft
Interviews
JOIN
a better way to get
your football news.
Thank you! Your submission has been received!
Oops! Something went wrong while submitting the form. 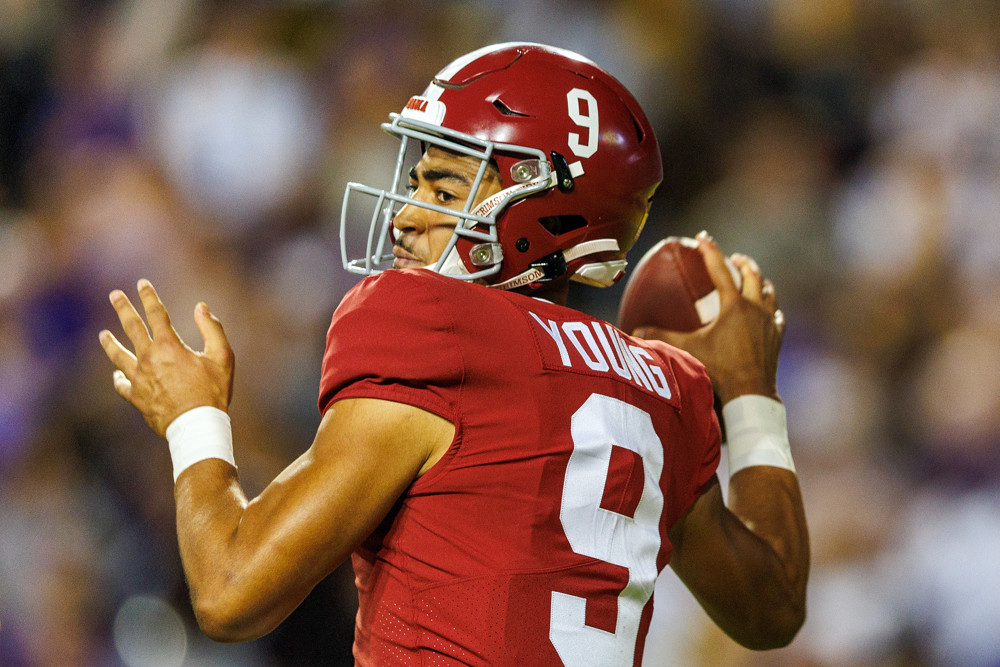 Bryce Young - QB - Alabama
Young is small (6-0, 194) for the position but has virtually every other franchise quarterback trait.
Image: John Korduner/Icon Sportswire
2.

Will Anderson Jr. - EDGE - Alabama
Widely considered the best overall talent in the class, Anderson is an elite pass-rusher and run defender.
4. 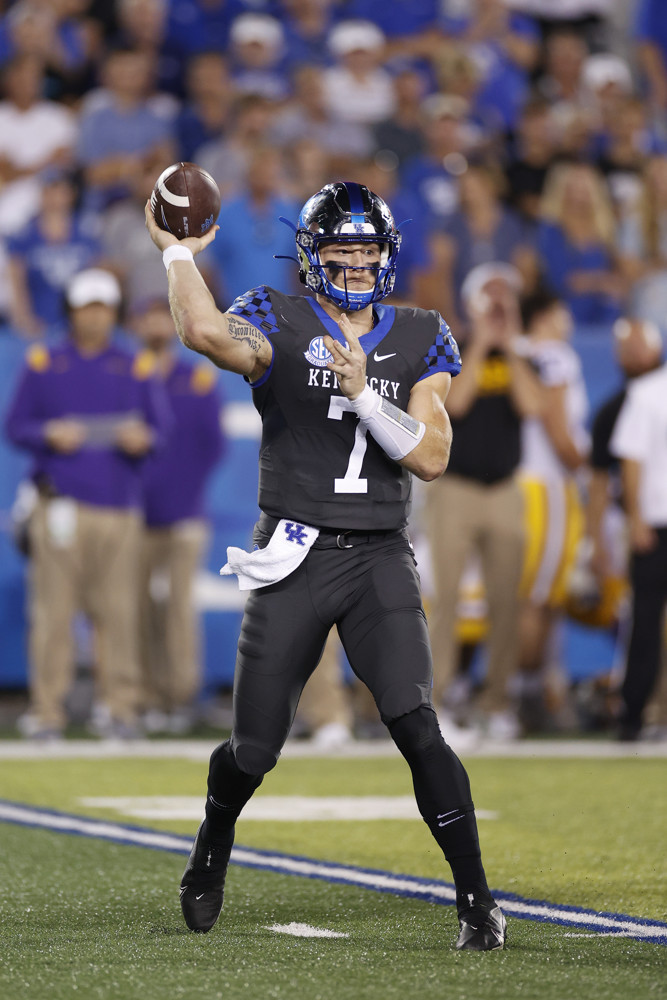 Will Levis - QB - Kentucky
Geno Smith is a great story — but he’s not the long-term answer in Seattle. Levis is inconsistent but has prototypical tools and All-Pro upside.
Image: Joe Robbins/Icon Sportswire
7.

Jalen Carter - DT - Georgia
With the top quarterback options off the board, Detroit ends up with a once-in-a-decade-type defensive lineman.
7. 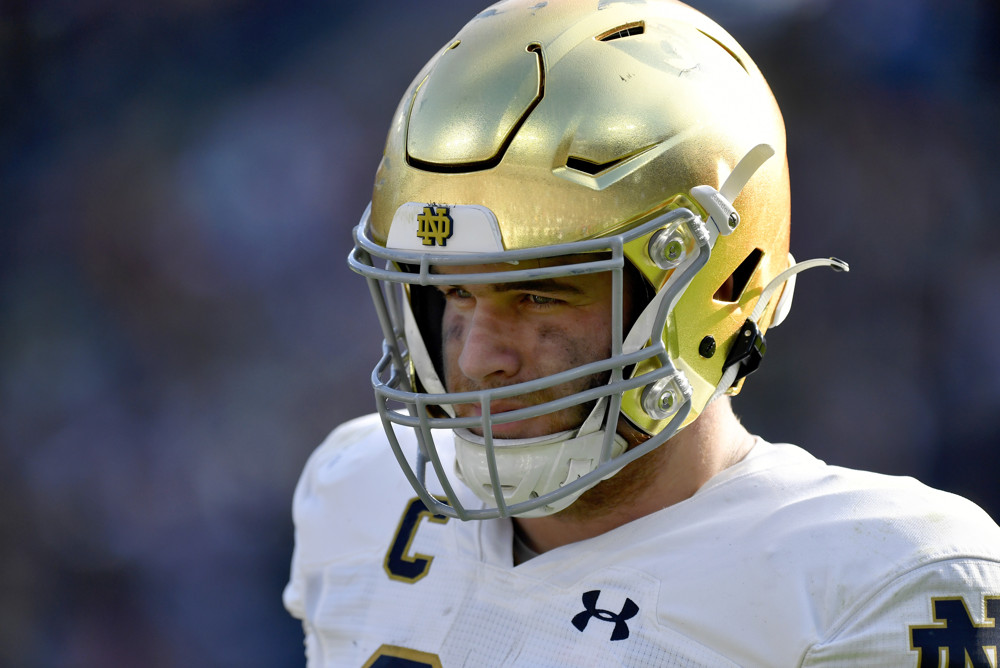 Bijan Robinson - RB - Texas
Robinson is a unique talent who would make the Eagles’ running game nearly impossible to defend. Note that Miles Sanders is a free agent in 2023.
11.

Jaxson Smith-Njigba - WR - Ohio State
Smith-Njigba is an instinctive receiver with the route-running polish to help Aaron Rodgers right away. 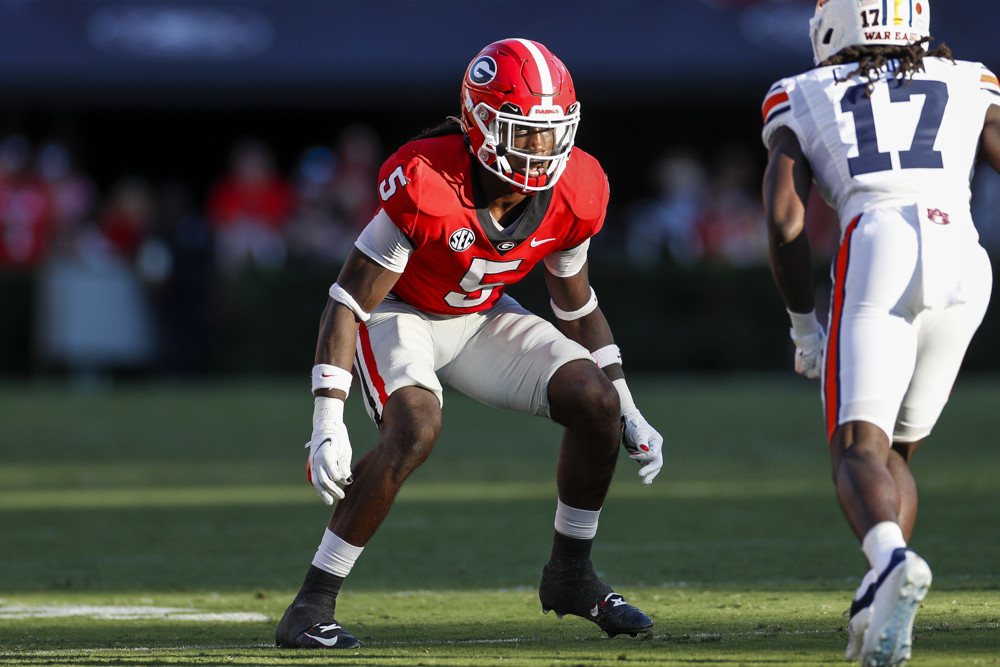 Tanner McKee - QB - Stanford
Another Stanford quarterback for the Colts — McKee has the size, smarts, and arm to develop into a franchise quarterback.
15.

Quentin Johnston - WR - TCU
Johnston (6-4, 215) is one of the most dangerous yards-after-catch receivers in CFB history. He’d create a terrifying trio with Kyle Pitts and Drake London.
16.

Bryan Bresee - DT - Clemson
Bresee carries some medical risk (torn ACL in 2021) but is incredibly disruptive. The Chargers have been seeking an interior force like him for years. 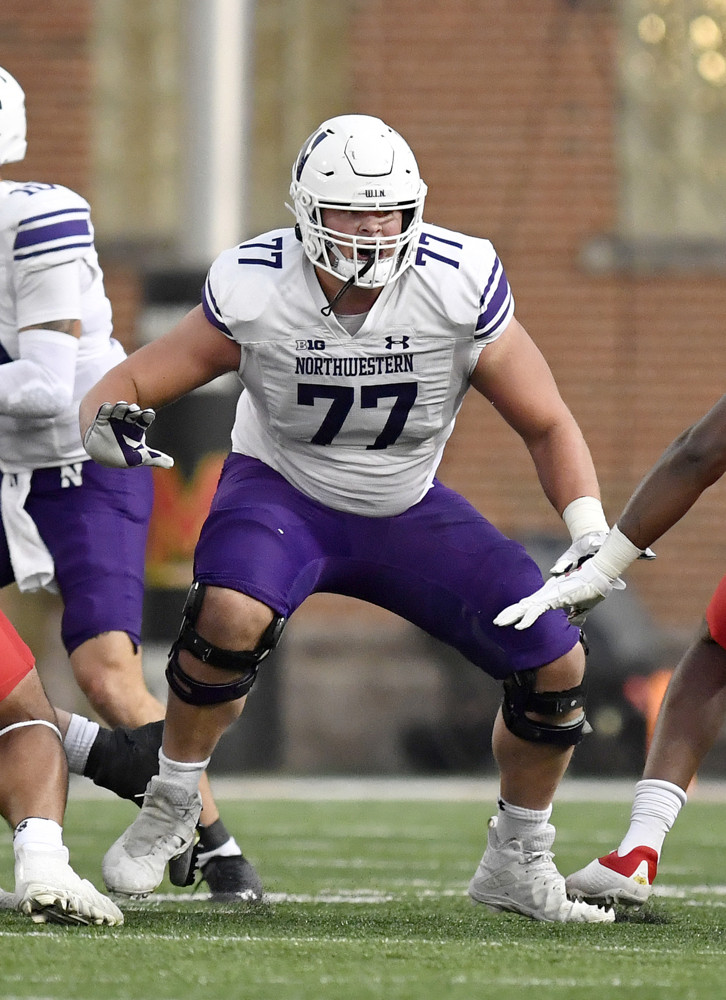 Peter Skoronski - OL - Northwestern
Skoronski has the makings of a perennial Pro-Bowl offensive lineman. The only question is whether or not he has the length to start at offensive tackle.
Image: Randy Litzinger/Icon Sportswire
18.

Paris Johnson Jr. - OT - Ohio State
Johnson Jr. can be the long-term solution at left tackle for the Jets. He hasn’t allowed a sack or committed a penalty this season.
19.

Joey Porter Jr. - CB - Penn State
Porter Jr. has elite physical traits and can be a force in coverage and run support. He projects as a replacement for impending free agent corner Jamel Dean, who will likely be too expensive for the Bucs to retain.
20.

Broderick Jones - OT - Georgia
The Broncos need a left tackle upgrade. Jones, a former top recruit, has dominated the SEC in his first year as a starter. 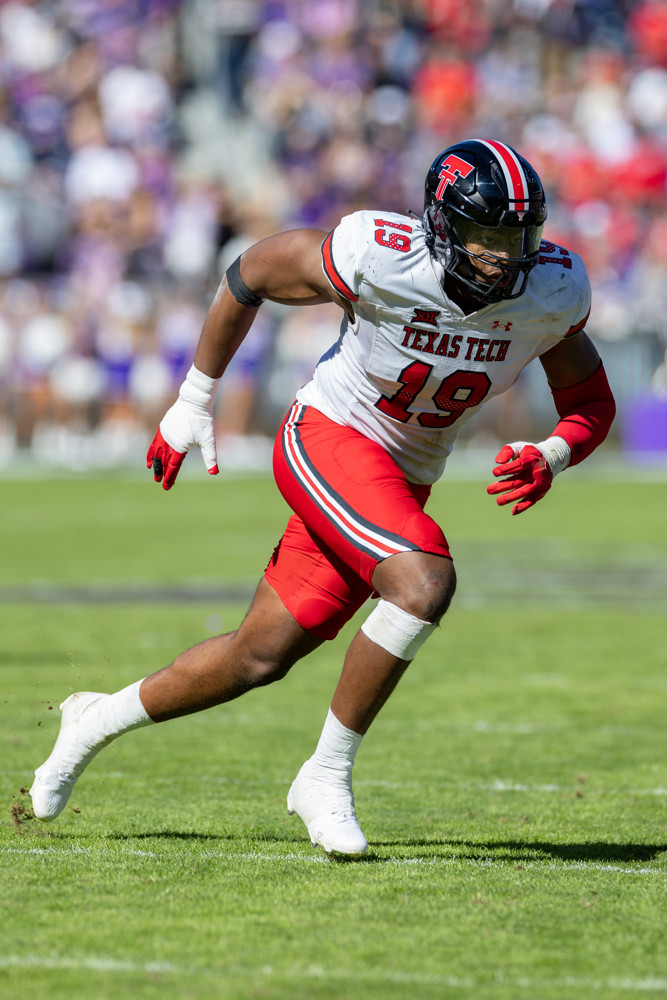 Jahmyr Gibbs - RB - Alabama
The Patriots need an explosive element on offense — Gibbs is seen as an Alvin Kamara-type, who is dynamic in both the run and pass game.
23.

Trenton Simpson - LB - Clemson
Simpson, a sideline-to-sideline defender, is the best remaining player on the board. He’s got the skill set to defend against Lamar Jackson.
24.

Brian Branch - S - Alabama
It’s tough to find any flaws in Branch’s game — he’s sticky in coverage and a technician versus the run. He’d project as a replacement for either Micah Hyde (31) or Jordan Poyer (31). 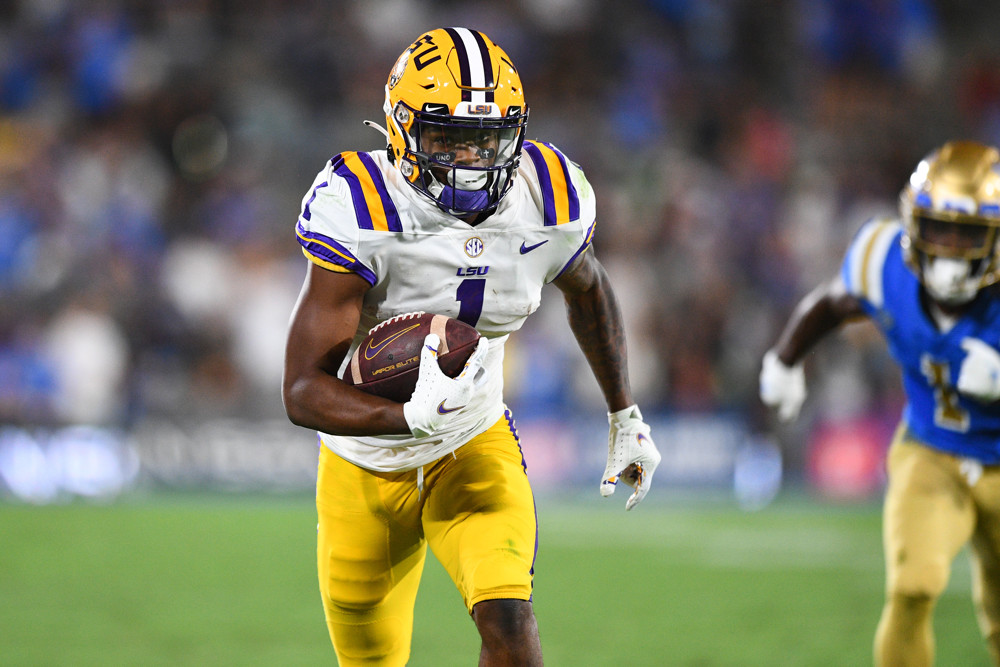 Kayshon Boutte - WR - LSU
Boutte is in the midst of a down season but possesses as much pound-for-pound talent as any receiver in the class. He’s got the acceleration to be a lethal underneath target for Lamar Jackson.
Image: Brian Rothmuller/Icon Sportswire
26.

Jared Verse - EDGE - Florida State
Verse has been one of the most explosive pass-rushers in CFB this year. He’s got the size/speed combo to be a force opposite Harold Landry in 2023.
27.

Cam Smith - CB - South Carolina
Smith has the length and aggression Dallas prefers in its corners.
28.

Darnell Washington - TE - Georgia
Washington is a unicorn prospect with the potential to be very special — he’s a huge (6-7, 270) athlete with soft hands and elite blocking ability. 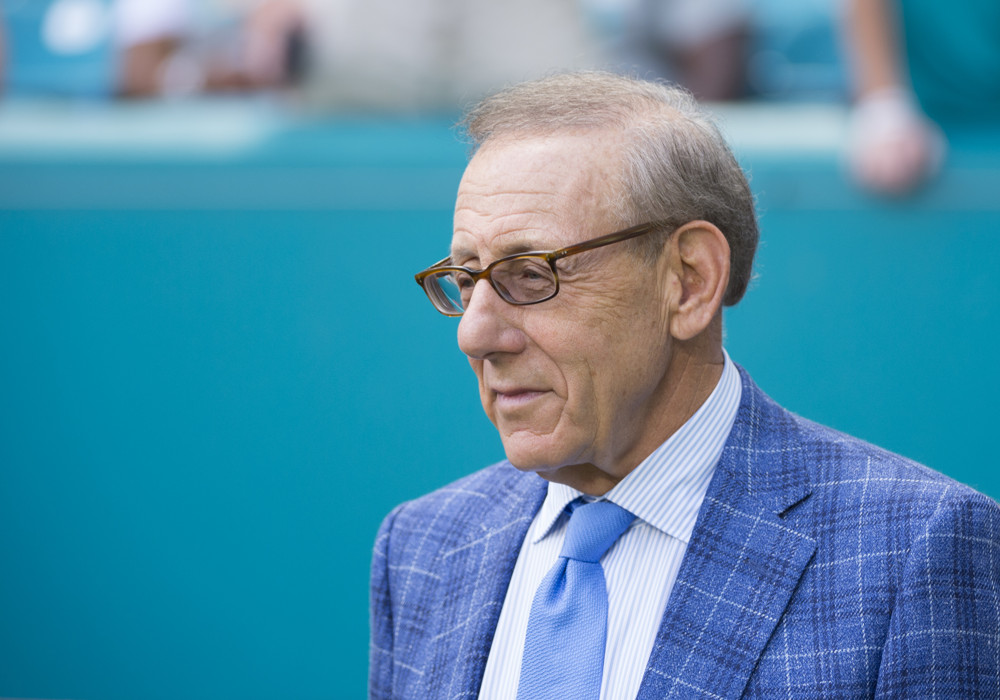 Christian Gonzalez - CB - Oregon
Gonzalez is an experienced defender with a great track record of ball production. He projects as a replacement for Patrick Peterson (32).
31.

Dawand Jones - OT - Ohio State
The only thing that can stop Patrick Mahomes is poor pass protection — Jones (6-8, 360) would be an upgrade on RT Andrew Wylie.
32.

Nolan Smith - EDGE - Georgia
Smith would bolster the Eagles’ run-defense and offers developmental pass-rush upside.
sign up for the
No.1 NFL newsletter
Thank you! Your submission has been received!
Oops! Something went wrong while submitting the form.
Legit Football © 2022
Interviews
Mock Draft
Advertising
Privacy
Legit Football has no affiliation with the NFL, NFLPA, or any individual NFL franchise.